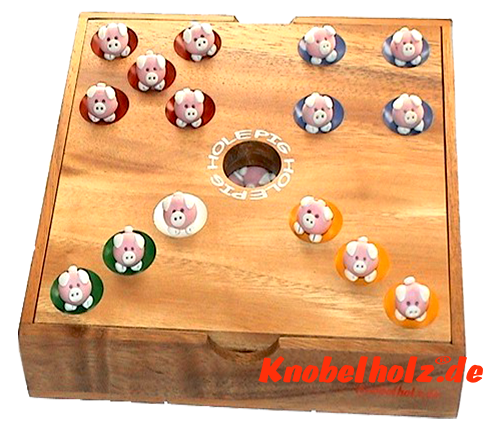 Pig Hole Schweinchenspiel, the most popular dice game from Knobelholz.de

The exciting story of how our most popular game Big Hole turned into the pork game Pig Hole, briefly told here. The Big Hole dice game for the whole family was a popular game until it came to a fixed idea and has been further developed by us, in the team knobelholz.de .... 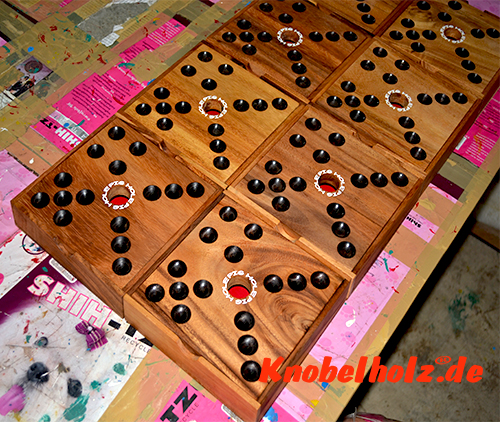 The game Big Hole, some of which are also known as the game "Why Ever Me" or "Darn 6", was started in early 2000 by us to redesign. The game Big Hole was a very popular dice game for the whole family, but we wanted to make the game even better and were in the process of redesigning and further developing this game. There were some variations and we played with friends and family members new rules for the game Big Hole to increase the fun factor for the future pig game. After weeks of trying and playing we did not really get around to discover something special. At that time no one knew what would later become of a stupid idea with wine and beer. 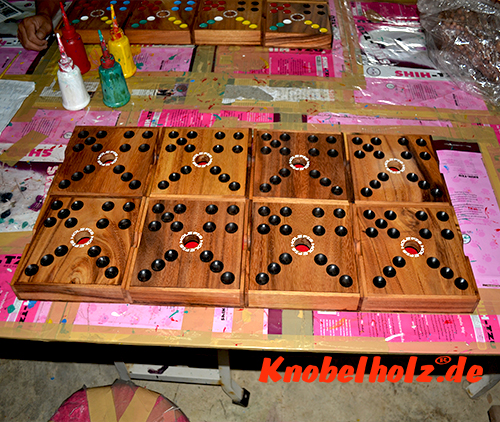 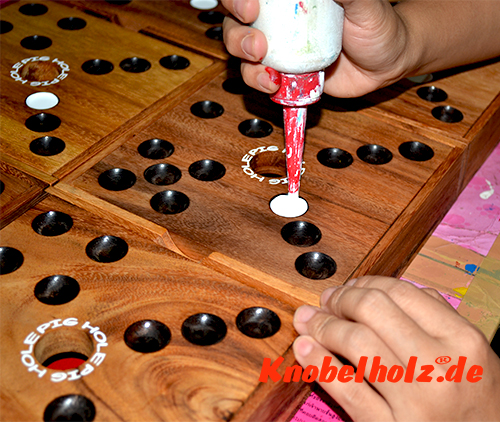 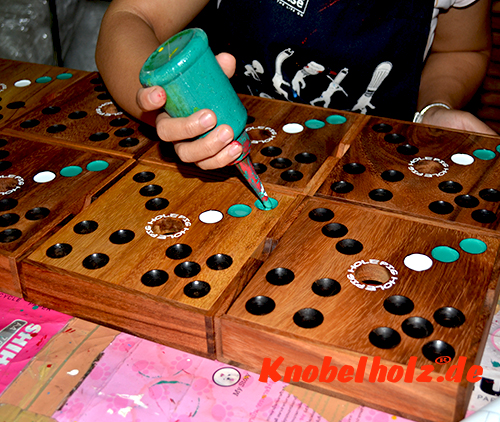 As seen in the photos, our games are all handmade and made with love. It is all the more important that the game of fun comes into its own. The game Big Hole was funny and sounded good but we had a fixed idea, more fun more fun. The game was meant to excite more people and we wanted to bring more fun and more risk in the game. Thus, the game Big Hole should get a new coat of paint and get a kick. But how does one do it? Actually, all the ideas that we have, just like that and in time pressure or by force you get nothing. So we made some bottles of wine on some evenings and looked for the kick of the idea for the new Big Hole game .... 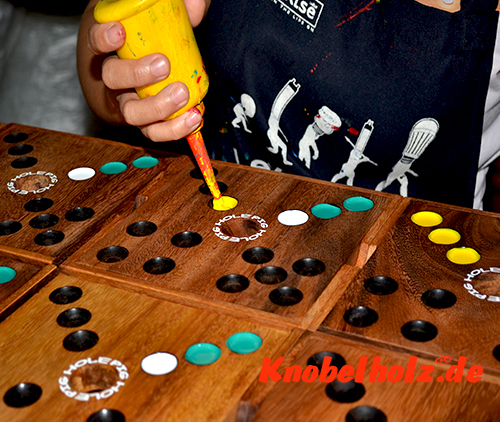 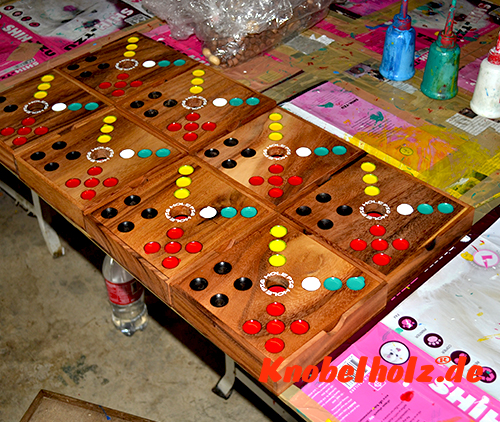 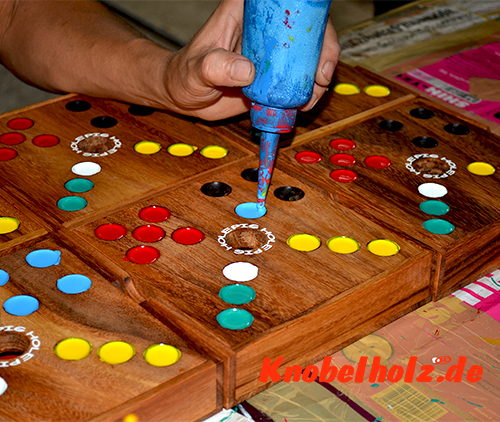 IIn our workshop, for the colored design of some games and puzzles, the playing fields, the pig games, are painted by hand. In order to make the playing fields evenly we do not use brushes but use the color to flow when it is fresh and distribute them with a small wooden stick and the outer edges of the playing field. Five colors are used for each field number: 1 in white and 2 in green the 3 in yellow and 4 in red the 5 in blue color. The 6 is the well-known pig hole where the characters disappear when a 6 has been rolled. After the paint has been applied, it must dry to then grind off any overpainting. 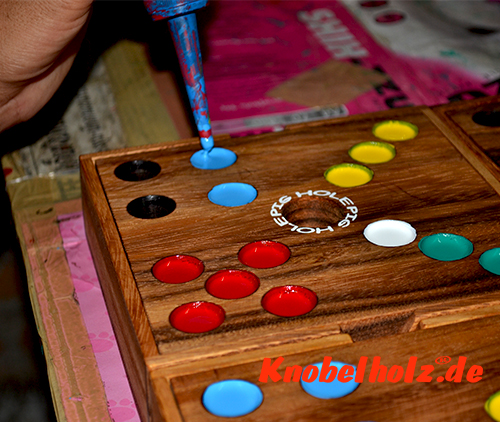 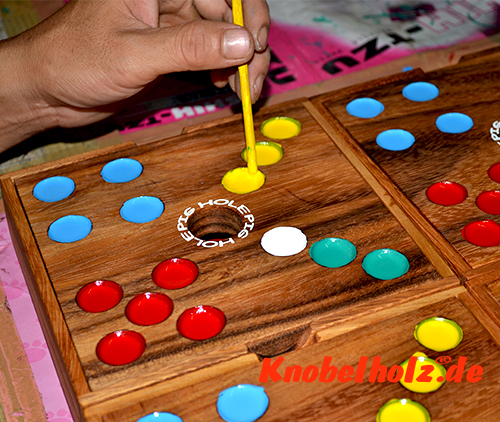 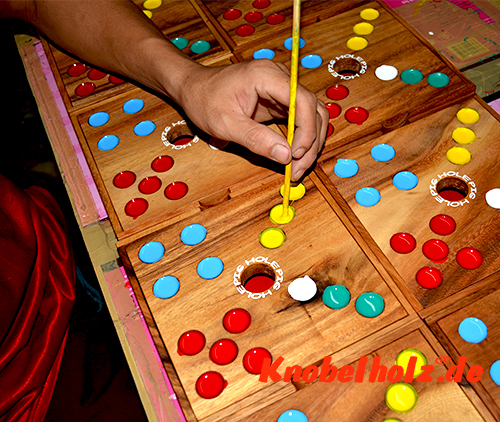 Now it happened, after a few evenings and bottles of wine and beer, sometimes too deep in the glass has been sucked. So a lot of laughs were made in a new round of Big Hole with friends and it used to be called Pig Hole instead of Big Hole because in our mood we just started to exaggerate and lost some of the control over the letters that left our lips. That was so funny because the idea came to sink pigs instead of sinking ships and the idea came up to invent new rules of chess. We invented names and game variations for many popular games and it got more and more messy. We wanted to do a real mess and the idea was born to make a pig out of the Big Hole. It was supposed to be a P18 game and the heads were smoking. Us many many things you should do if you had thrown appropriate dice. 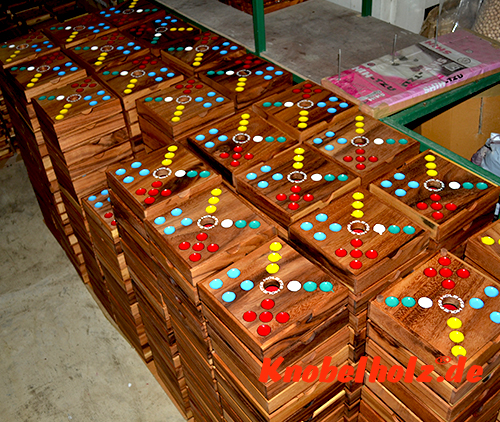 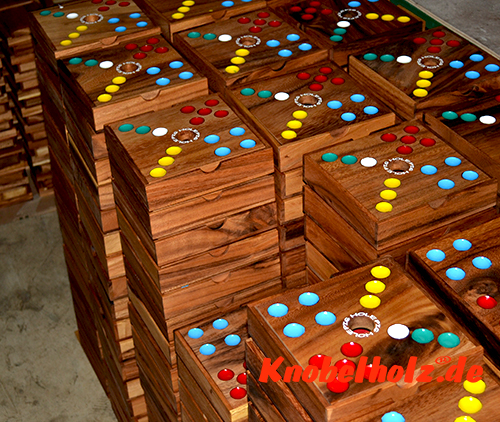 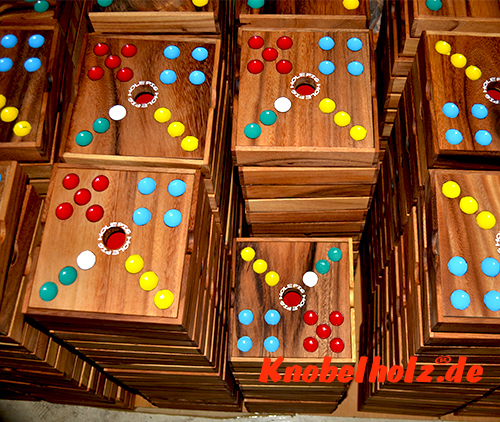 All of our Samanea wood puzzles and games are packed with game instructions or puzzle tutorials and sold to our customers. So now all pig games with game instructions, 60 pigs and a cube must be packed. Once the playing surfaces have been sanded and polished with cooking oil, the games are welded in plastic and put into storage for shipping and sales. Beautiful wooden box made of seed wood, in which the 60 figures can be safely kept as pigs and dice. The lovingly designed playing field and the funny piggy figures will delight your family and especially your children. A fun dice game for the whole family, where the spell Pig got a whole new meaning, but also a nice gift for smaller children to learn numbers and amounts.

If you always wanted to make a little mess and play with pigs as playing pieces, then you are at the board game Pig Hole, the pig game, at the right place. In this game you have to reach pigs with correct numbers per roll of the dice to get rid of all pigs as the first player. By rolling a dice, a pig can be thrown into the hole, thus eliminating that pig and having the advantage of winning. If your own pigs have all been catapulted through the hole in the middle, or have been placed on one of the playing fields, the game can be decided for yourself, you win the pig game. Overall, the game works with up to seven players and can last up to several minutes or hours, depending on the group. In Pig Hole it depends on the luck of the dice - only who dices the correct numbers, can throw his pigs through the hole, or just set down to the appropriate number.