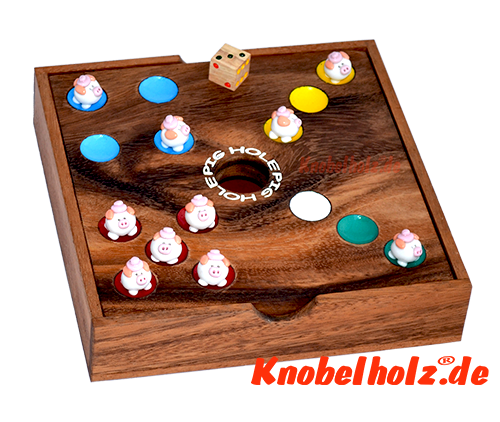 Pig Hole Schweinchenspiel, the most popular dice game by Knobelholz.de with cute and funny pigs. the pig dice game play up to 6 players and they try to get rid of the pigs by rolling the dice. But how? Constantly you get new pigs even you dont want  ... when i get a 6 and lose a pig ?

Our pig game Pig Hole, which was our game Big Hole, until we first offered it with Piggy in 2008, developed quickly to our most popular game for 2 to 6 people, which is played in many families with enthusiasm. The little pigs used as game characters in the game Pig Hole quickly won the hearts of all the friends of Knobelholz.de and our wooden games and puzzles. A simple gameplay combined with pigs brought our pig game into many living rooms for young and old.

Contents: 60 pigs and a dice

Pig Play Pig Hole is a fun dice game for all ages for 2-7 players.

Players get the same number of pigs: 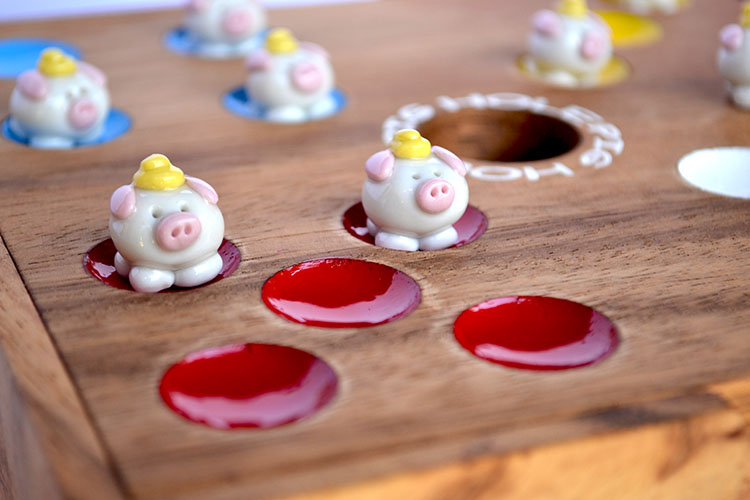 The playing field of the pig game is free and everyone puts the pigs in front of him on the table. In the first round, each player rolls one dice and places a piglet on the diced number (for example, a pig on the 3 in the 3). In the second round, each player rolls twice and again sets a pig. In the third round (should be until then) each of the players must make a compulsory throw and can then, as long as he could do something else, roll as often as he likes. No matter in which round, in the Pig Hole, a number field is occupied and the player of the dice had not been able to place a pig, he must take all the pigs from the entire playing field and sit down in his place on the table. You then had bad luck and you have a lot more pigs than your fellow players and you will lose the pig game. Now it starts again in the first round. But wait for all to get pigs they do not want. If a player rolls a 6, he can throw a pig into the hole. This pig is out of the game. The player can decide for himself whether he rolls further or whether he passes the die. But beware it could be occupied. The pig game has won, the player who has no pigs in his place. A very funny game since you always get piggy even though you do not want. The term "pig had" gets a new meaning here !!! Have fun while playing .... and do not forget to feed.

Here you can find the pig game in the box Variant: